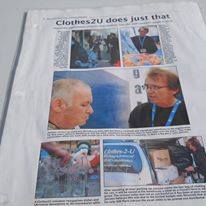 In a Light Magazine article, the author stated “What started with Ernie Jantzen’s desire to get rid of accumulated clothes has blossomed into a ministry of giving away clothes to those who urgently need them”

BC Local News comments on 15th anniversary of Clothes2U http://www.bclocalnews.com/community/445166193.html#.Wb_qUtx82M4.facebook

The Aldergrove-based Clothes2U organization is celebrating their 15th anniversary this month of giving clothes, toys, linens, diapers, personal and small household items free to those in need.

“What was originally intended to be a one time thing has blossomed into helping people throughout the year and in many communities across metro Vancouver and the Fraser Valley,” said spokesman Ernie Jantzen.

Clothes2U will be holding its next event at Nicomekl Elementary School, 53 Ave. at 200 St. in Langley on Saturday, Sept.30 from 10 a.m. to 12:30 p.m. Admission is $1 to get in, everything on the tables is free and Clothes2U ensure a fair distribution by monitoring amounts taken.

More information can be found at www.clothes2u.ca

An event offering gently used clothing and household items for free to those who may be struggling financially is coming to the Semiahmoo Peninsula.

Clothes 2U, a non-profit founded more than two decades ago by Aldergrove resident Ernie Jantzen, will host its ‘Valentine’s Giveaway’ Feb. 4 at the White Rock Baptist Church (1657 140 St.).

Set for 11 a.m. to 1 p.m., items suitable for babies to adults – including toys, diapers/incontinence items, linens, books, personal and smaller household items – will be given away, according to a news release.

It follows Clothes 2U’s first giveaway event of 2023, which is set for tomorrow (Jan. 21) in Aldergrove.

Jantzen told Black Press Media that he was inspired to start Clothes 2U by the example set by his mother, who passed away six years ago.

“My dear mother was a huge inspiration, with her example during my childhood of helping others,” he said.

“I am glad she was able to see Clothes 2U develop into something of substance before she passed away.”

According to information at clothes2u.ca, the non-profit was an offshoot from a single parents group that Jantzen started in the 1990s.

“Some clothes were available for the single parents to take at the meetings but it slowly developed a life of its own,” the site explains.

The initial event, held in the parking lot of a Langley elementary school, “showed a powerful need in the community for this service so Clothes2U was born.”

Clothes 2U events are held in halls and churches across Metro Vancouver and the Fraser Valley, the site notes. While the items themselves are free, there is a $3 admission fee (no charge for children aged 10 years and younger).

– with files from Tanmay Ahluwalia